The following bowlers from Cornwall have been selected for the England squad. 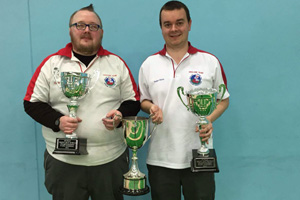 At the 2016 World Championship Peter Hore, playing with Christopher Willies (West Midlands) won the World Pairs title winning 11 out of 12 games played over the three days of the championships.

On Friday they started with a 16-8 win against Sweden which they followed up with a comprehensive 26-5 win over Italy.  The only defeat of the weekend came in the third game, losing 11-13 to Wales on the last end of the game,  The pair bounced back to finish Friday's games with a 16-7 win over Canada.

Saturday saw close wins against Scotland 13-11 and reigning British Isles champions Ireland 14-12.  A comprehensive 22-7 win against Norway finished Saturdays play.  On Sunday morning wins against Belgium 17-7, India 18-9 and Germany 18-7 sealed top spot in Group A on shot difference and a place in the knockout stages.

The Semi Finals saw Peter and Chris up against the Ireland 'B' pairing of David Doherty & Norman Rutledge and claim a 13-7 win to move into the final game where they met the England 'B' pairing of Stephen Burrows & Adam Smith who defeated defeated Sweden's Jonas Hager & Victor Andersson 15-9 in the second semi final.

Peter & Chris got a great start in the final picking up 3 on the first end and 1 on the second to lead 4-0.  Stephen and Adam picked up 2 on the third end.  Five consecutive scoring ends for Peter & Chris put them in control leading 10-2 after eight ends.  They conceded 2 on the ninth and 1 on the tenth end before picking up 1 on the eleventh end to lead 11-5 with four ends to go.  Another 2 were conceded on the 12 end before picking up 1's on the thirteenth and fourteenth ends to secure victory 13-7.